Last cycle I had a saline sonohysterogram. The procedure was pretty uncomfortable for me as the practitioner could not get the catheter passed a tight curve in my cervical canal. She was able to get the saline to fill the uterus to look for abnormalities. She noted something appearing to be soft tissue, she thought it may have been from the catheter accidentally shearing off some soft tissue during insertion. She said she will share the results with the reproductive endocrinologist and get back to me. A day or so later she called me and said that the Dr. agreed it’s probably nothing, but said they could do an in-office hysteroscopy to be sure, seeing as we were gearing towards IVF it would be good to make sure everything is normal prior to starting.

Disclaimer: This is my own personal experience with an in-office hysteroscopy. Every woman is different and will have their own experience. I am not a doctor, nothing in this post should be considered medical or any other type of advice.

I agreed. They never mentioned to me that most hysteroscopys are done under general anesthesia, they made it sound like a quick easy procedure nothing more complex than the HSG or sonohysterogram. It was a lot more invasive and painful (in my experience) than I expected.

To schedule I had to let the nurse know on CD 1, that my last IUI had failed. They scheduled me for the hysteroscopy. My clinic only provides this service on Thursdays I found out, and would not give me a time until 2 days prior to the appointment. This made it difficult for me to schedule with work. But we worked it out. I finally told my boss that I have been seeing a specialist, and next month I will require more time off and flexibility in my schedule due to treatments (IVF).

My appointment was for 11:30 am, but they said I had to be there by 11 am, and to take 800 mg of Ibprophen one hour prior to the appointment. I arrived by 11, it took them a while to bring me back. They brought me to a ER hospital looking set up with multiple “bays” with gurnies separated by privacy sheets. They gave me 2 hospital gowns, hospital socks and a hair net to put on. I started feeling uneasy, what did I agree to? It’s not like me to not obsessively research a procedure before I have one, but this time I didn’t. I thought I knew what to expect from what the nurse had told me, and just my imagination. I did google a little a couple days prior but it was all about general anesthesia hysteroscopy so didn’t read too much into it. 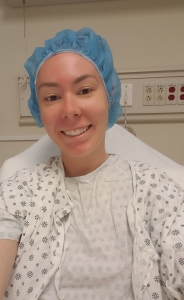 I got undressed and sat on the gurney, the nurse brought me a warmed up blanket, which was really nice. I waited for a while for the Dr. to be ready. Then we went into the “surgical suite” as I would call it. I saw the doctor scrubbing in. Apparently this is pretty serious I thought to myself. The room was much like the HSG procedure set up, except there was a table of stuff lined up for the doctor to use during the procedure. The bed was comfortable with leg holders instead of “stirrups”. They put sterile drapes under my hips and over my lap and legs.

The actual procedure started with the speculum. I feel for women who feel pain from the speculum. If the speculum is painful, I don’t think and in-office hysteroscopy is a good choice for you, push for sedated hysteroscopy! After that they clean the cervix with antiseptic, I found this a little ticklish maybe I’m just weird. After that she used local anesthesia to numb the cervix, there was some slight pinches but not very uncomfortable. Next She began dilating the cervix. At first it was fine, then some mild discomfort, then WOW THIS IS NOT FUN. I was surprised, I thought I would be numb, apparently it only numbs the cervix, not the cervical canal or uterus. The doctor could see that it was pretty painful when she was dilating, so said tried the camera to see if it was dilated enough. The camera could get most of the way in until a really tight curved spot at the end (just like the sonohysterogram)  It was very uncomfortable. The doctor took the camera back out and said she had to dilate more. More pain, sharp and cramping pain. The nurse guided me to breathe deeply and was very reassuring. After that they tried the camera again, more sharp pain and cramping, but the camera was in. I felt relieved, once it was passed the tight curve it wasn’t that painful. Next the nurse started pumping in saline solution. This was fine at first, but as more and more was pushed in it became very uncomfortable.

The doctor looked around with the camera, I too could see on the screen & the inside of my uterus. We saw the this floppy soft tissue and some other things. “Polyps” the doctor suggested. She let me know she needed to remove them. My mind was racing how are they going to fit more up there! They let me know the scissors go through the cameras catheter and nothing more has to be added in. I agree and they proceed. After the camera is in they need more saline pumped in, she begins cutting away at the soft tissue. It starts hurting again, I could definitely feel the tissue being cut away, but more so the pressure from the saline, she also had to maneuver the scissors/camera to cut at different angles. I was softly crying and shaking but trying my best just to be calm and let them get it over with. The nurse gave me an ice pack for my neck, I thought it was a little strange but it was nice feeling. After the pieces were cut she used a vacuum to save them to be tested for pathology. After she removed everything I felt so much better, the pain and cramping almost disappeared. The doctor briefly went over the findings, saying they could very rarely be cancerous, and sometimes can be “endometritis” which is different from endometriosis. She asked if I had any questions, I asked if this was the cause of my infertility, she said no, but it is helpful to have it removed prior to IVF.

The nurses had me sit on the bed a while before walking the short distance to the other hospital bay bed. After getting back to where my stuff was they had me sit longer and took my blood pressure twice with about 5 minutes in between to “cool down”.

I left and went back to work for the afternoon. I had some light bleeding and slight cramping for 5 hours or so.

I’m so glad its over and done with. I’m glad I had the procedure, but in hindsight I wish I had it done under general anesthesia. I didn’t even know this was an option. This cycle will just be an “off cycle” where we’ll use natural timed intercourse, which has shown to be about 0% effective for us. Maybe removing the polyp will be our magical cure, a girl can dream right?!

Our IVF consult is at the end of this month, one day before my expected period. I am nervous and excited to start. This month can hurry up and fly by.